The three stages of enlightened migration

How the path to the summit of Adam’s Peak in Sri Lanka helped me understand my relationship between two cultures. 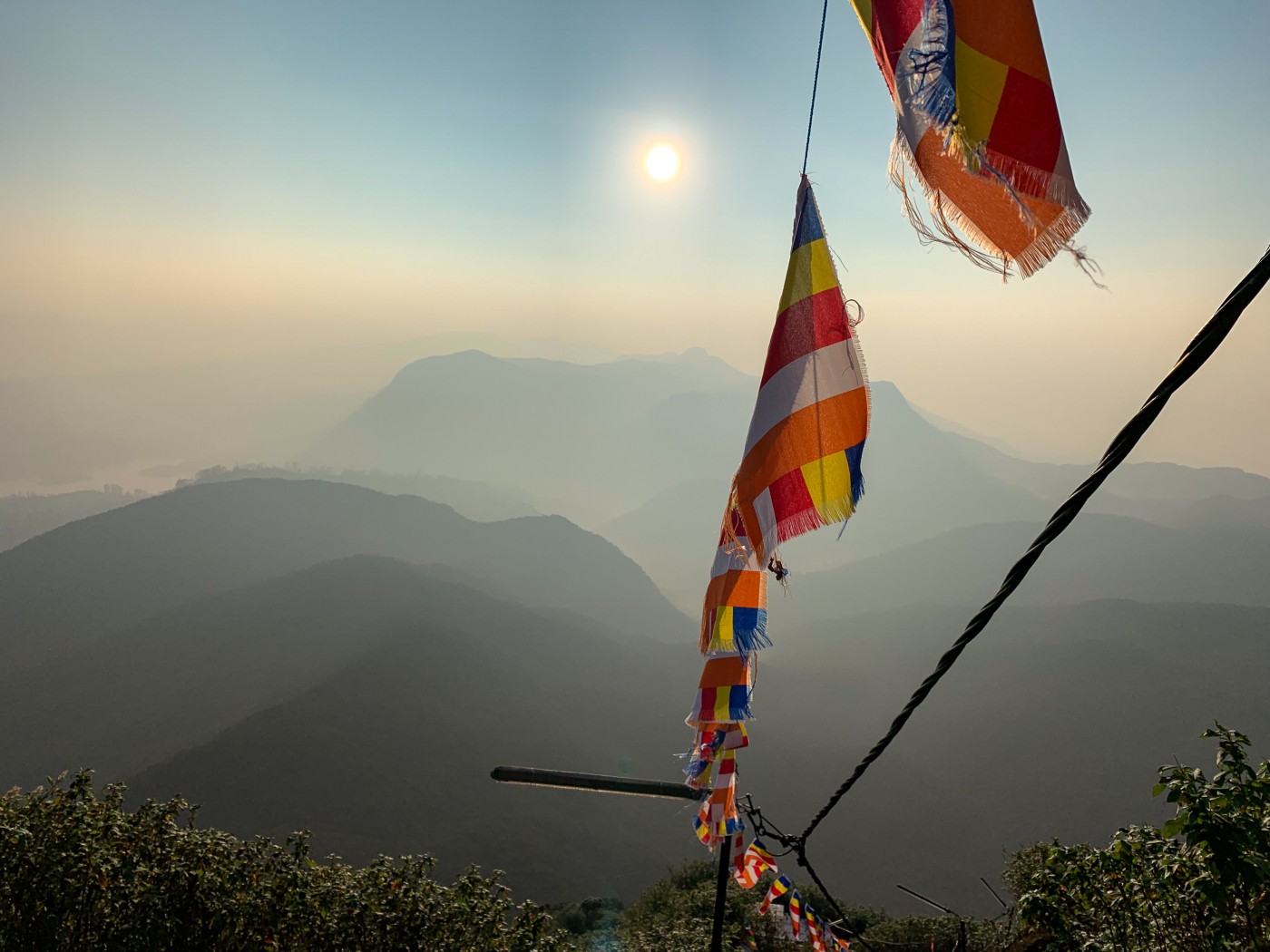 Every step I took required another sharp intake of breath. As I straightened my tired knee, I knew the next task was simple: lift the other leg and take another step forward. One more step. One step closer to the top. Another summit in another country. Except this time, the summit is in the country of my birth; the first mountain I am summiting in Sri Lanka. But this summit isn’t the same as all the others. With this one, I am one of countless generations of my family going through the motions to reach the top. 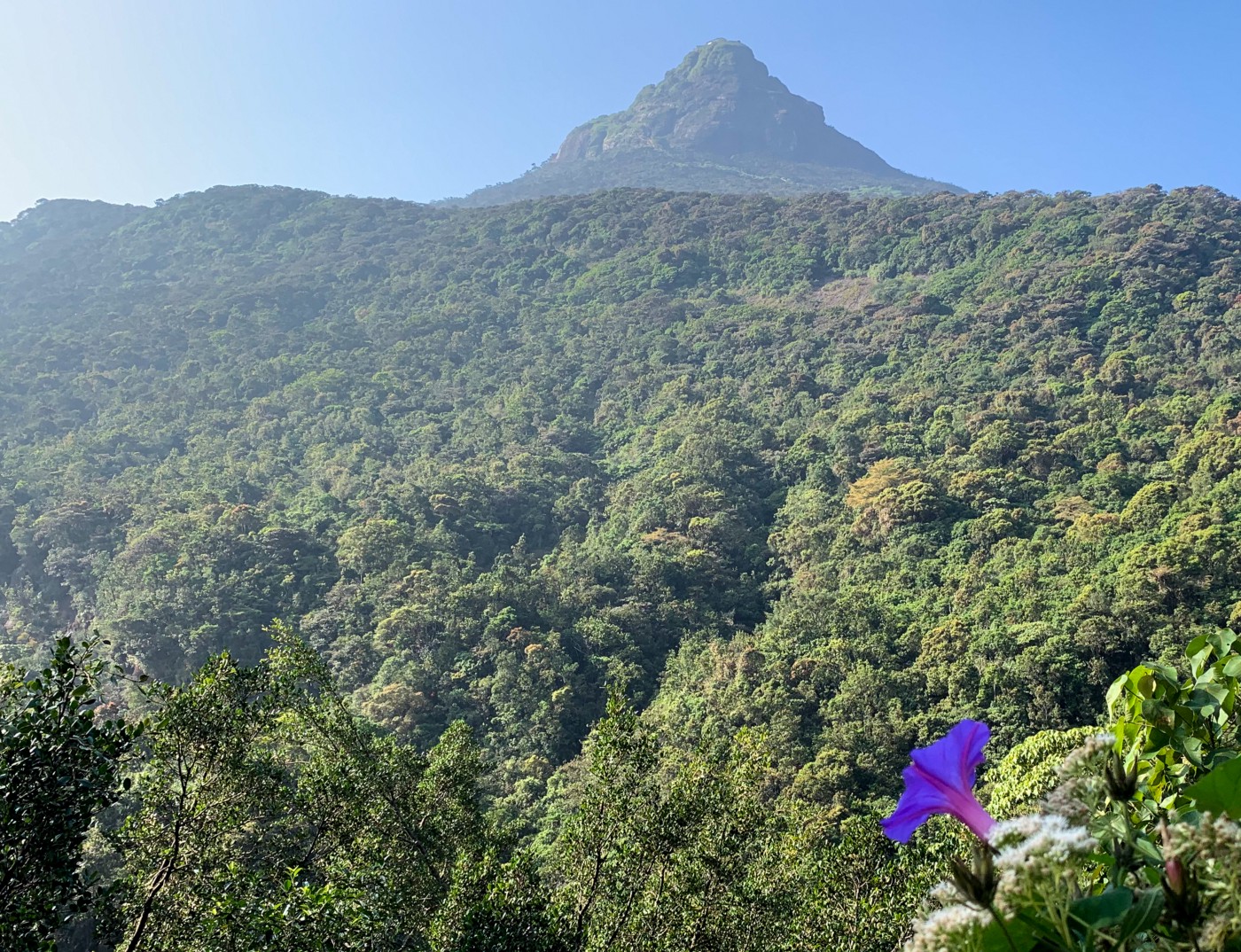 Photo: Adam’s Peak (Sri Pada) from the base

The mountain is Adam’s Peak or in Sinhalese “Sri Pada”. The mountain (2,200m) is in the central highlands of Sri Lanka. On its pointed, triangular summit is a rock bearing the shape of the foot of Buddha, Adam, Abraham or Vishnu, depending what and who you believe. For my family it’s the holiest of pilgrimages that a Buddhist can undertake, and it is one that has been carried out for more than two millennia stretching back through my entire genetic lineage on the island of Lanka.

For me it isn’t religion that’s going through my mind as I climb the 4900+ steps; for me it is the continuation of something my family has been doing from times ancient. This is likely one of the few things that I have in common with my parents, grand-parents and so on. Something that connects me to them through the ages in a single thread like the prayer thread tied to our wrists at the start of the climb. And it is during conversations with my fellow climbers and friends, Kaj and Kirsten, that I recognize the subtle changes that have occurred in my relationship with both myself, my family and the country of my birth.

As I climbed towards the summit of Sri Pada, walking in the footsteps of my ancestors, I could see the winding path of self-realization and actualization through my migrant story in at least three stages. You can swap the word “migrant” for “immigrant” or “expatriate”; ultimately it’s about displacement from your original culture to a new culture. It is, of course, reductive to assume everyone experiences the same path in the same order. I do believe that different forms of migration and circumstances cause different experiences. However, I believe that these are common stages to most people who experience cultural displacement.

I’ve heard from many people, anecdotally mostly, on how migrants first adjust to their new environments. In general, we tend in some ways to reject our past, sometimes physically as well as symbolically. An entrant into any community who truly wants to integrate often tries harder than most to be like everyone else. We learn the songs, the dances, the way of speaking, the customs and the culture. We dive so deep that you would be hard-pressed to imagine us not being a positive or integral part of whatever culture it is. If there is a definition of being a New Yorker, for example, a newcomer may become the exemplification of that definition.

However, that comes at a cost. For some people, myself included, the idea of truly “belonging” meant not having any second-thoughts; it meant rejecting where I came from. Some may adjust their accent so much that people never ask where they are from. Some may not speak about home; some may make sure their children do the same sports as everyone else, even if they themselves don’t understand those sports. Where you are from becomes something you barely visit; it becomes an afterthought.

In my case, I’m pretty sure most of my friends would recognize that person between 1992 and 2001. I now identify strongly with Newfoundland and then with Canada. I can sing you Newfoundland songs, step dance, tell you about seal sausages and talk with some authority on aspects of Newfoundland history and more.

But here’s the thing, in this path you also tend to “reject” your family. You often don’t even know you are doing it. My mother and father in Sri Lanka were a world away and I wonder how they felt seeing their child become more and more integrated to a culture they barely understood. How did it feel for them to watch their child essentially turn their back on your culture? Did it make them feel like a failure? That they had gone wrong somewhere?

I’ve always looked at this through my eyes, I never looked, nor cared how my parents felt about any of this. I assumed that they were proud of my successes and took my being Canadian in stride. But now I wonder.

Photo: View from the top of Adam's Peak

With some effort, the newcomer wins the battle for acceptance in their chosen culture and community at some point. Some day you wake up and you are truly a New Yorker, Irish, Newfoundlander, Canadian.

Suddenly you lift your head out of the sand and you realize that you did have another culture and it’s actually not a problem to reach back out. Maybe, like me, you start learning how to cook. You remember the meals your mother cooked and realize that you cannot get this from any place but to start learning yourself. Maybe for someone else it’s the music or an art form. Maybe for others it’s to start telling stories to their children. Maybe like me, you decide to try and bridge the cultures with visits to the mother country bringing friends.

This is not to say that you are rejecting your new culture, on the contrary you are trying to fuse together the parts of your previous culture that you feel is acceptable in the new. It is as if you have placed that former culture into a centrifuge and separated the individual cultural layers in order to absorb just the parts you desire.

I do not believe, at least with me, that I was yet comfortable enough as a Canadian to ever have the courage to let go of the tether. Therefore, despite starting to accept the old culture I “doubled-down” on also establishing roots in the new at the same time. Hindsight being 20/20 and our brains being malleable enough to adjust history to fit the narrative that absolves our individual selves of blame, I can definitely see that many of the decisions I made came from both an insecurity with my tethers to Canada and a need to absolve myself of the guilt of rejecting my parents’ culture.

I believe this stage of a migrant story requires some catalyst such as the death of a relative or significant life changes. In 2012, my father was diagnosed with cancer and then passed away shortly thereafter. Other events added up including my marriage followed by divorce, for example, and of course moving to Finland.

Through all the highs and lows any insecurity I had of being Canadian was no longer a concern. I am, and always will be Canadian, and will never doubt my Canadian-ness. No matter where I am in the world, I miss my friends who are my family, but I neither fear to lose them nor fear that I will not recognize as home the feelings I have when I see the towering Rockies, the cliffs of Signal Hill or the gentle calm of Lake Ontario.

However, my need to connect with my remaining parent and my birth culture became ever greater. How could I possibly shirk my inherited culture and all that had gone to bring me here? In climbing those steps up Sri Pada, I had finally done something that I knew my mother, father, grandparents had done. This was a continuation of their history as much as it was a step forward for me. Here I was teaching a Sinhalese song I had learned as a child to Kaj. Here I was exclaiming over the same views my ancestors had marvelled. And here, finally, my Sri Lankan heritage and my own culture were in harmonious lock-step with each footfall bringing me closer to the summit of Sri Pada.

I doubt I have experienced all the stages of the migrant story. And as you can see from above, the migration experience isn’t about success, it’s actually about many little failures as you try to relate to those around you. There’s so much more to learn, people to meet, to teach and more cultures to absorb. What’s the next stage of this story? Can you tell me?

What I do know is that my deeper understanding of myself has changed the relationships I make and the way I genuinely feel about coming to Sri Lanka as I never thought it would.