Startup @ Sydenham and the Solar Spin

This past year, I’ve been lucky enough to be part of a pilot project here in Kingston, Ontario called Startup @ Sydenham

Imagine you are standing in front of a panel of entrepreneurs and you are pitching them your creation. You have to convince those entrepreneurs to buy, invest or otherwise support your product. Sounds a bit like Dragon’s Den or Shark Tank? Well, now imagine that you are 10–14 years old.

Pitching the solar and pedal-powered phone charging table the “Solar Spin” to the panel of judges.

This past year, I’ve been lucky enough to be part of a pilot project here in Kingston, Ontario called Startup @ Sydenham that gave young students from grades 5–8 the chance to learn from, act like and become entrepreneurs. It was a community partnership between Sydenham Public School, the Parent Council, St. Lawrence College, Queen’s University (SparQ Studios) and our group of entrepreneurs at Innovate Kingston with funding from the Limestone Learning Foundation. Organized by Dorianne Sager, co-chair of the Parent Council, the program was broken into two parts and I was lucky enough to participate in both.

In the first part, the group of entrepreneurs from Innovate Kingston gave lessons on aspects of their businesses: Creating and Managing Teams, Research, Product Design, Marketing, Branding, How to Write a Business Plan, the Art of Pitching — the basics of running a business — were some of the topics. My own personal task was to teach Product Design in one hour! I chose Harry Potter as the theme and the students worked on creating games in the Harry Potter universe as a way to think about what designing a product meant, product target audience and so on. 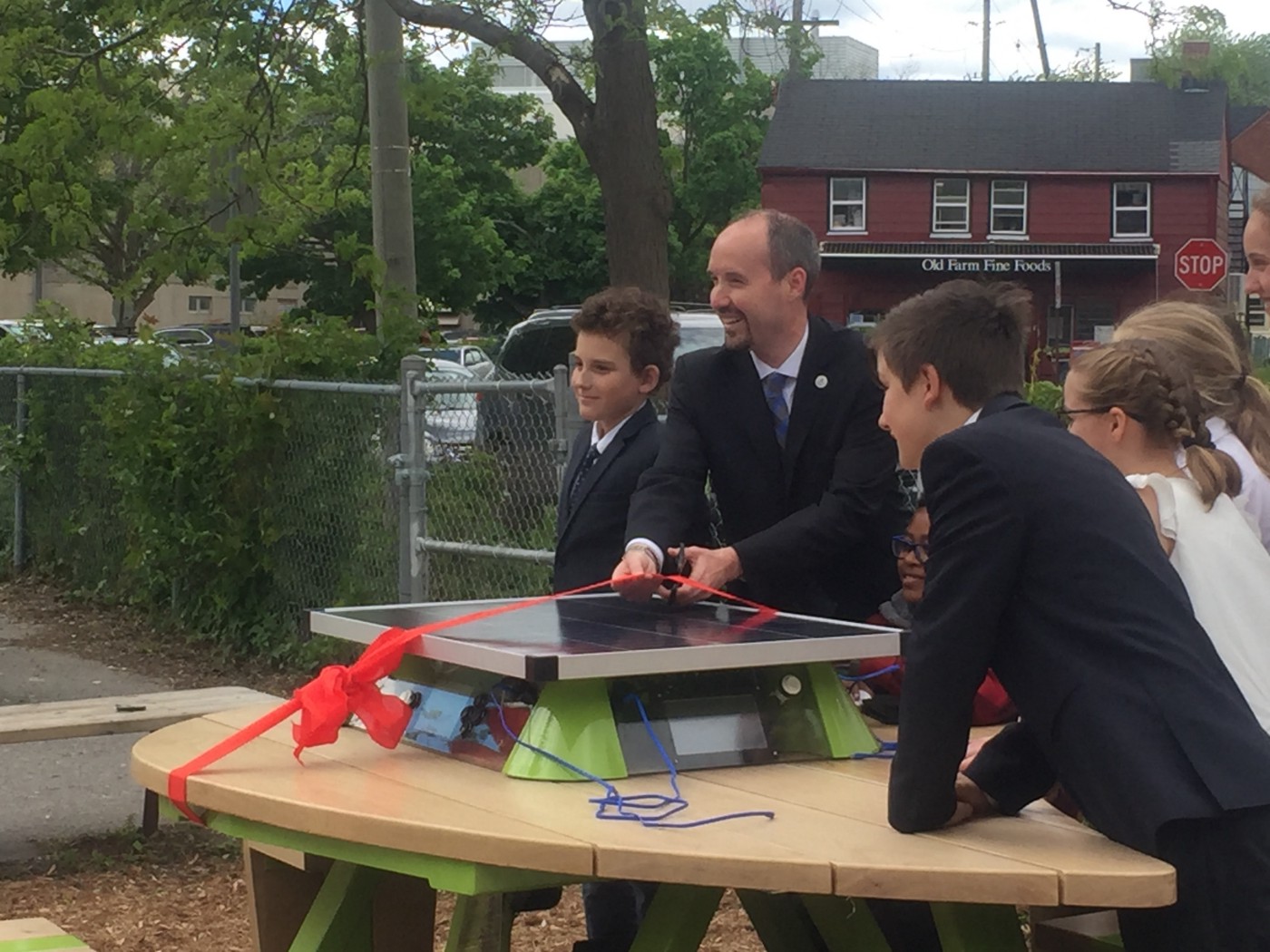 The Mayor of Kingston, Bryan Patterson, and kids unveiling the Solar Spin at Sydenham Public School. 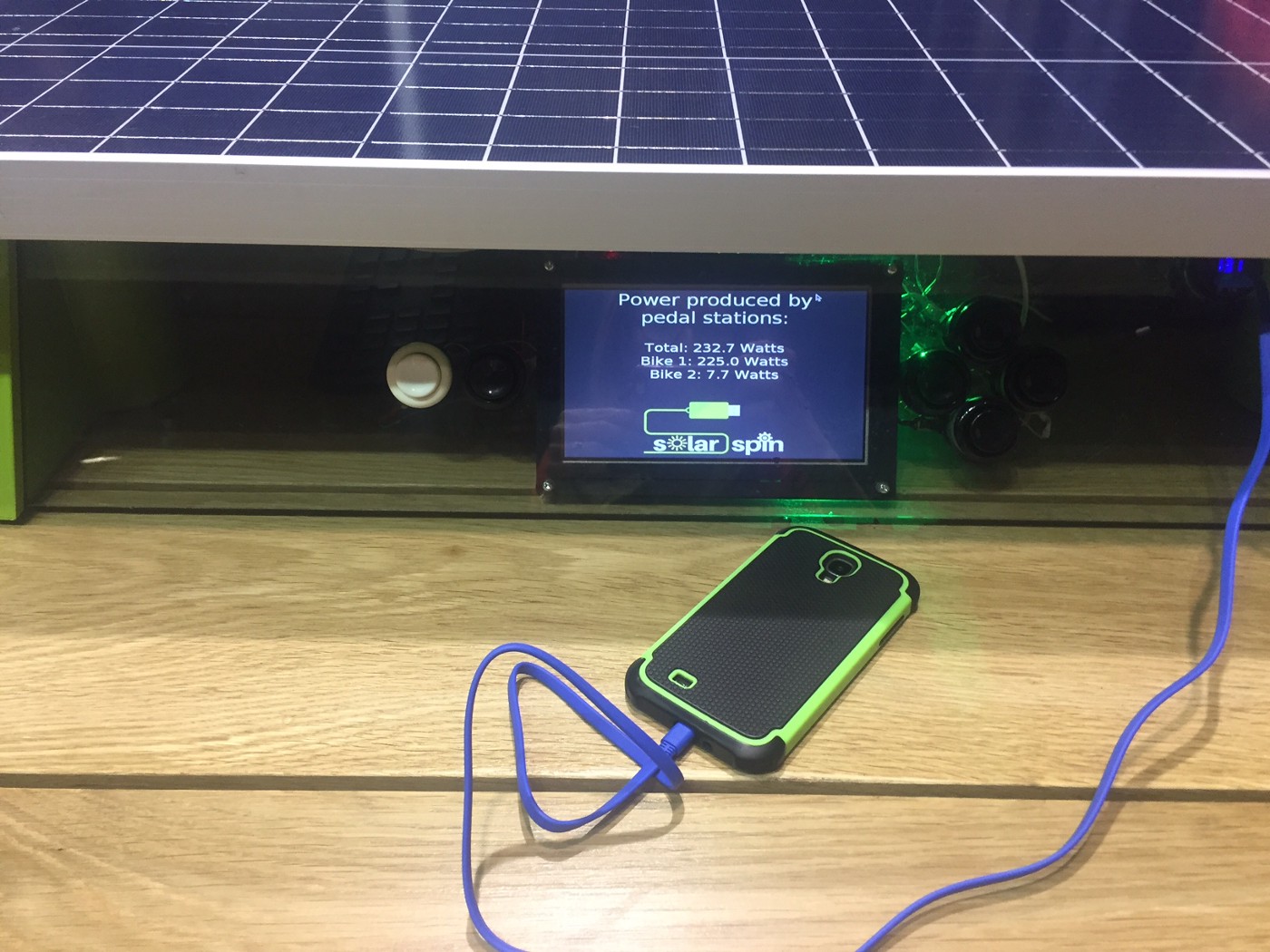 Table charging a phone with the Raspberry Pi

In the second part of the project, led by Jarrad Fairborn of St. Lawrence College, the kids helped design and build an outdoor solar and pedal powered charging table. Let me describe this table: The table is to be placed in playgrounds and public areas. It seats six with a wooden leaf design. On each end are pedal seats that help change the battery that is in the centre area of the table, which also features a solar panel box that houses a Raspberry Pi that the kids helped program to display information about the power generated and consumed, and will eventually — the more kids learn how to code — display more information and even video games.

Finally, the students then pitched to the entrepreneurs on where they would take this table, why they built it the way they did and what they learned from it. On a bright sunny day, with the event opened by none other than the mayor himself, Bryan Patterson, the students were smartly dressed, proud and bubbling with excitement. The very same excitement I see when a group of us get together to discuss our businesses, our ideas and our hopes for the future of the products we work on.

I can say that at age 11, I would have been hard pressed to get up and describe this in a presentation worthy of Shark Tank. And most importantly it seems as if the educational outcomes of the project were achieved. When asked, the students were able to see the connection of what we had taught, and also where they could take that to the future. They learned about working in teams and learning their own particular tastes. They learned about attaining that creative excitement which I hope will last with them far into the future.

Over the years of living in Kingston, I’ve been impressed by opportunities created for students. However, nothing has impressed me as much as the year-long dedication towards the Startup @ Sydenham and Solar Spin project. Parents, students and teachers should be proud of this project and I hope it will be replicated again and again, not just in Kingston but throughout Canada.