I promised Pixel seventeen years ago that he would have an amazing life and I think he did. And I told him the night before we went to the vet I would make sure the world would know him. 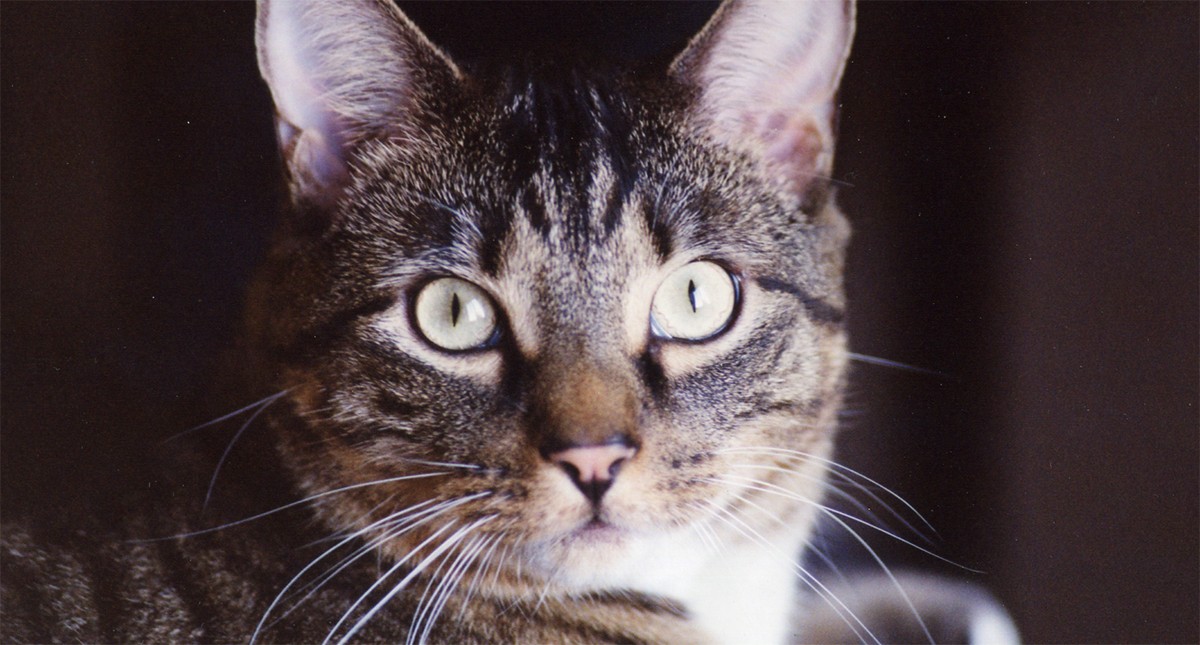 On a blustery cold November night in St. John’s, Newfoundland seventeen years ago, a small black kitten strayed into the shelter of my apartment doorstep. This story about a cat named Pixel begins with that kitten. I had never had a cat though I had grown up with dogs aplenty. That night I took in this nameless kitten, fed it milk and eventually fell asleep with the kitten on my belly. This kitten came back three more times on those cold November evenings and each morning, thinking the kitten had a home, I let it out. Then, one day, the kitten never came back. 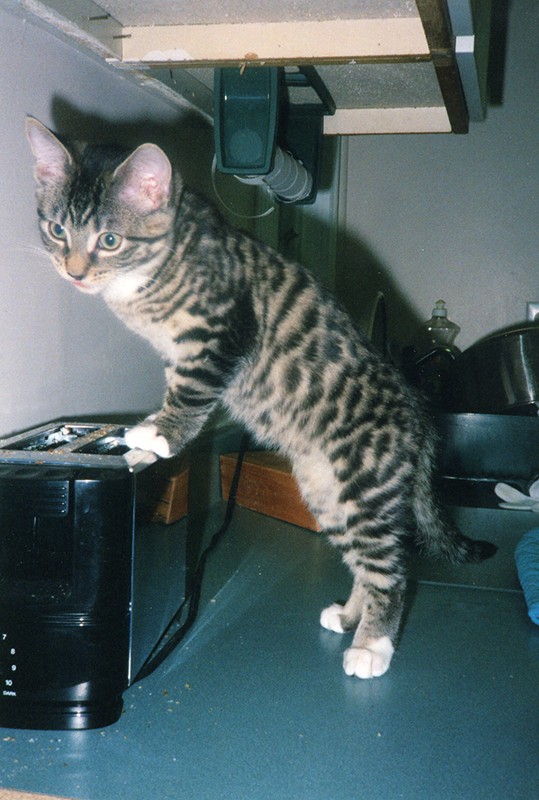 A very young Pixel, no taller than my toaster

A few weeks later I went to the SPCA in St. John’s. My plan was to adopt an old cat. I had just received my Canadian permanent residency and finally, I thought, maybe having a cat companion to make up for that small black kitten I felt so guilty about, would be what I needed. My future in Canada was uncertain, what would a German/History graduate even do for a living? In the end, I adopted a striped kitten with a lot of attitude who would not let me alone at the SPCA. Coincidentally, the kitten shared my birthday (as far as we could tell) and, like me, was born in the Year of the Tiger. I named the kitten “Pixel”. He was “pixelated”.

This last week, we bid farewell to Pixel.

I promised Pixel seventeen years ago that he would have an amazing life and I think he did. And I told him the night before we went to the vet I would make sure the world would know him.

Pixel was my companion till 2012. He was the first I saw every morning and often the last purr I heard at night. From 2012 till last week he was with my friends and became a part of their family and finally he could run outside. He was ferocious, had attitude, brooked no dissent and was even dubbed “evil cat” by some. He bit, he purred, he hunted, he cuddled, he scratched and he loved lots of attention. I’m told in these last few years he terrorized Meghan and Jason’s neighbourhood and even chased dogs three times his size. That’s my Pixel. 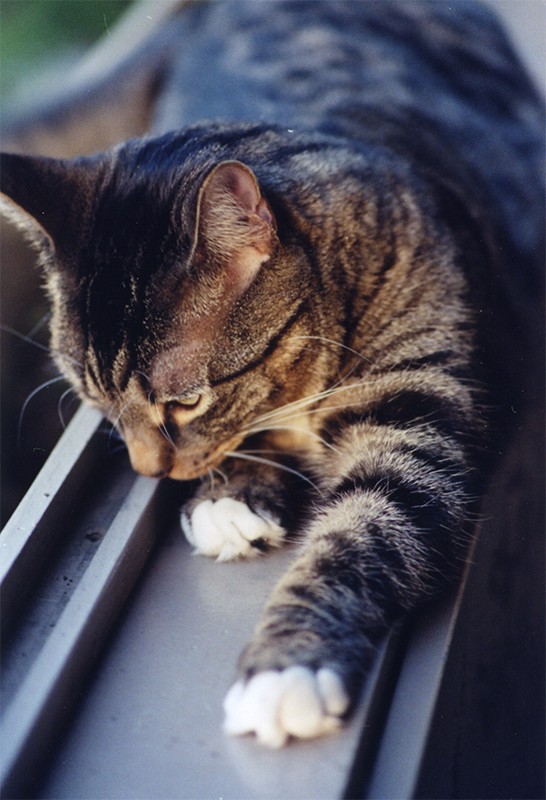 Together, he and I went from St. John’s, to Kelowna, to Edmonton, to Montreal and finally back to Edmonton. In 1998 I had no idea where he and I would end up. I had no idea that I would use Pixel to create my first web site, learn manual photography by taking endless photos of him, and even take on bits of his personality. Through Pixel I learned to be less meek or maybe, as a friend said, at least show my own attitude. Like Pixel, I was probably never that meek.

And Pixel did not go quietly into the sunset. I would like to think that even at the end he recognized me even though I didn’t live with him any more. Jenna and I stood by as he breathed his last. And I will miss him.

However, I will celebrate this amazing cat. For without him, the first part of my Canadian journey would have been so less entertaining and much much lonelier. In the tradition of great wakes, let me tell you some stories.

Pixel and the shower curtain

As a kitten he would enter the bathroom with me when I would have a shower. For two weeks he would sit in the back corner and wait. One day I came home to discover the shower curtain had been ripped in two spots. Next morning, I realized that he had ripped the curtain in such a way that he could stare at my head while I took showers. Only slightly creepy. 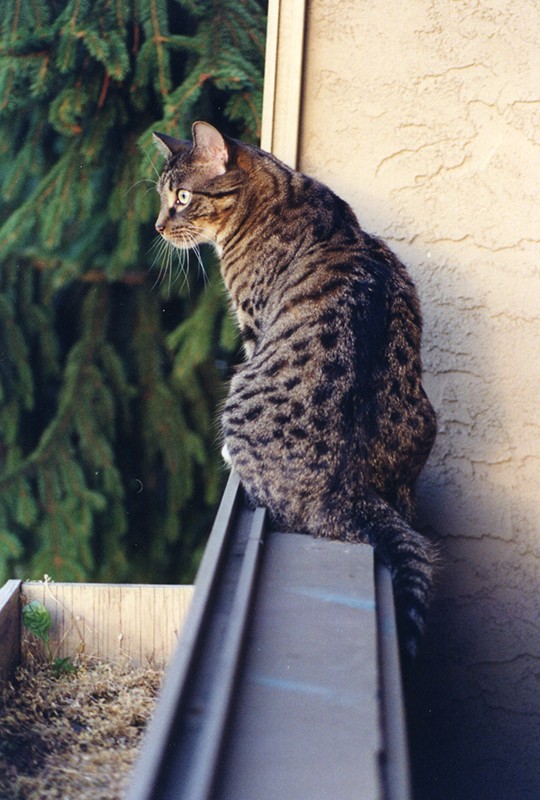 I did actually manage to teach Pixel to respond on command to my whistle, which he answered even to the last, and also to my “sit” command. That took many many months of patient training with cans of tuna. But yes after some years he did actually respond to me saying sit and closing my fist. Who says you can’t train cats! Of course, you could argue that Pixel was quite the genius as he managed to get tuna every time someone came over and I showed them the sitting trick ;)

I came to the conclusion that perhaps Pixel didn’t really have much respect for religion. One day I came home to discover playing with a small white ball. I thought, hey cool, Pixel found a toy. It took me a couple of days to realize that he had knocked over a small plaster statue of Buddha, decapitated it and was having fun with the head. Not long after that I discovered Pixel head deep in a copy of the bible ripping it to shreds. I guess Pixel was an atheist.

Just a few stories about a cat named Pixel. He will live forever in the memories of those that met him and those that lived with him.

I will miss you. 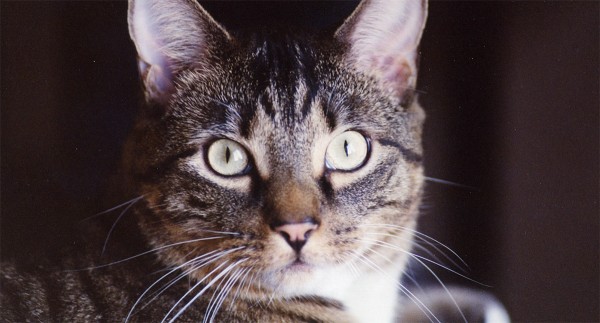