O Canada, Where Art Thou?

We are a country of mostly new immigrants, still trying to figure out how to live sustainably with this great land. 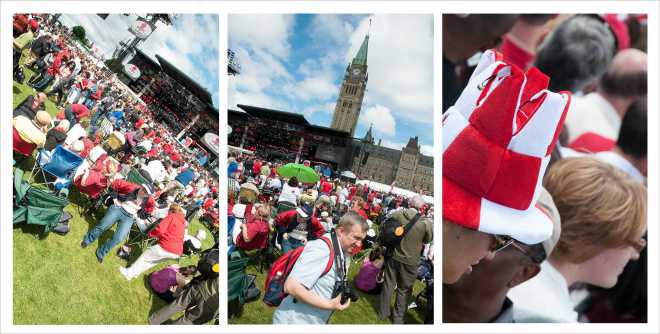 While many people do not struggle with having a “Canadian” identity, an immigrant often does. In order to even take the step towards citizenship you must first think about, decide and accept what it means to be “Canadian”. An immigrant must put aside the allegiance of birth. Our past which made us who we are, now becomes something that happened somewhere else, preserved frozen in time. Our future is to be painted on a blank canvas with new hopes, new dreams and often with a reality where the past left behind is ignored.

For me, becoming Canadian meant positively answering a very real and important question: “Would I be willing to die to defend this land and its people, like the Native Canadians before us and those who went to war in this past century?”

To answer that question, I had to truly believe in “Canada”, not just as a place and a country but as a vision for the future, of us as a people.

In 2015, I feel my Canada, the one I was so passionate about when I became a citizen in 2001, is slipping away. Instead of just complaining, I want to present my vision for Canada, a vision I hope you share. It is one I am passionate about and which I would gladly defend. It is a vision I have already chosen by living and taking citizenship here. So let me make a case for a future and a vision more positive, more fair, and more just than the one the Harper Government would have.

Neither Stephen Harper nor the government he leads is evil. Harper is, like you and me, a passionate Canadian. He has a vision and step-by-step he is making his vision of Canada a reality. I would like to counter that vision and ask what makes you “Canadian” and what vision of Canada you want.

My vision is for the Canada I saw so much potential in.

My vision is of a Canada about immigrants. Recently, I’ve been wondering if I would have been granted the rights of a resident in Canada had I applied today. In 1997 I was an international student from Sri Lanka, I had a history degree, I had next to no money, no family, no sponsor, and was living in, at the time, economically-depressed St. John’s, Newfoundland. I was also a student activist and even at one time a card carrying member of the Communist Party of Canada. Despite having built companies since then, created jobs and positively impacted my communities, I wonder where my application would have landed under the Harper Government?

Building a company is also about the people. Finding the right people is not necessarily about looking at how someone looks on paper. Investors don’t invest in companies unless they feel the people are focused, passionate and able to take their idea forward. It is all about human resources. Why would a country be any different?

My Canada invites anyone who is passionate to build a life in this country, no matter what you look like on paper. This is the country where first-time farmers expanded west living in rude sod houses in the harsh prairie winters. Let us invite entrepreneurs to build their passions in Canada while living sustainably alongside the nature we all want to preserve. We need be the Canada that embraces you whether your ancestors came across the Bering strait, on a steamer to Pier 21, or as refugees fleeing a humanitarian crisis. Exporting that tolerance and humanity to the rest of the world is what will make us a leader in this century.

My vision of Canada is not one of “us against them”. My Canada does not spread our beliefs at the barrel of a gun, and it does not defeat intolerance by simply finding a bigger stick. We must be the voice of reason helping to negotiate settlements to our world’s political and social crises. However, our diplomacy should not mean letting people off the hook for crimes against humanity no matter where they are. It starts with the Canada of Lester B. Pearson with peacekeepers and arbitrators and goes further.

My vision of Canada is not one where our own people are the enemy. We do not need to protect ourselves from each other’s ideas. We effectively communicate ideas and thoughts so that we build an inclusive society where we don’t need to spy on each other. It is the Canada where neither the rule of law, nor the “virality” of an idea is to be feared.

My vision of Canada is one where rational thought based on science and our collective intelligence is at the forefront of who we are. We do not muzzle our scientists or treat their findings with derision. Instead we incorporate their analysis, numbers and facts to the decisions we make. We teach our children the importance of our effect on the environment. We thrive to be beyond the middle of the pack in environmental decisions. We are at the forefront of a better tomorrow for humanity, like the Canada of Mulroney that fought to remove acid rain in the 80s but even more bold.

I suspect this is a vision many of us want, because it is what encouraged me in the decade after I first came here. You taught me all these things as being “Canadian” when I came here. Despite having no family, despite not being born here and despite not being raised here, this is the Canada I fell in love with.

I fell in love with you, my Canada, an amazing land of amazing potential not wrapped up in mediocrity, but eager to reach the whole world with your vision of tolerance, humanity and sustainability. Imagine, for one minute, how beautiful the entire world would be, now and for our children, with this Canada leading the way.

Happy Canada Day to my wonderful, beautiful and hopeful Canada.