But he won’t travel long alone

I have tried to explain to Brits, Americans and now Finns about the Tragically Hip and I have failed each time.

I’m homesick. The sky is dark in Helsinki. Cold rain whips against the windows. My good friend Eddie has passed through Helsinki like a will-o-the-wisp, beer-fuelled tornado. A few hours ago, the closing credits to The Tragically Hip documentary, “Long Time Running” had scrolled by.

I have tried to explain to Brits, Americans and now Finns about the Tragically Hip and I have failed each time. The last few days with Eddie in town have felt like an extended Tragically Hip album. The experiences raising the spectre of Gord Downie’s lyrics, the weather beating down like Johnny Fay’s drums. To finish, we poured some whiskey and watched Long Time Running late into the night.

It strikes me that the Tragically Hip’s last 25 years has matched the ups and downs of my 25-year-long first chapter in Canada. I do not know whether I am homesick for The Hip or my beloved Newfoundland and Canada, but I do know that this deep ache is a reminder of the mutual journeys we’ve undergone. Yes, you, my beautiful Canada and me.

Truth be told, I disliked The Tragically Hip when I came to Canada. This was music that I just could not quite get behind. “Fully Completely” had been released, they were coming to St. John’s and I was working for the student newspaper. I remember people fighting over the complimentary tickets that we at The Muse would receive to cover such events. But I, I was not at all interested.

“And come on in, sit right down,
No you’re not the first to show
We’ve all been here since, God, who knows?” 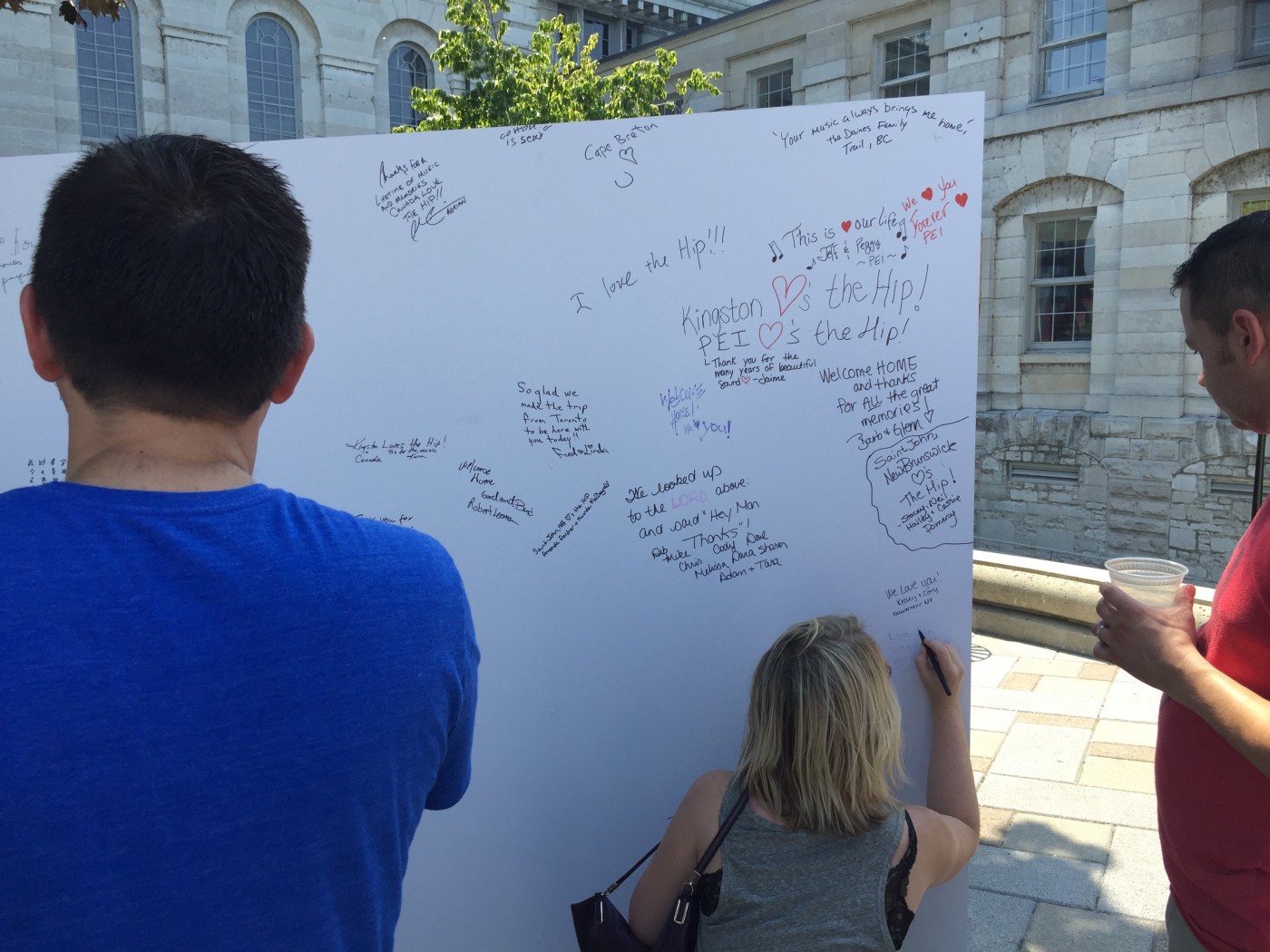 My ignorance of Canada was huge. As much as those that met me were ignorant of my history and culture, I was ignorant of Canada, the environment, of the weather, of the First Nations, of the history. As I now look at myself discovering yet another country, I can see that to truly understand a culture, it’s not just about language, it’s about the music. To like the Hip, I would have had to start accepting that maybe Canada was a country I wanted to explore and stay in. Something I had adamantly refused. To that end, perhaps a part of accepting The Tragically Hip was to accept Canada.

Part 2. “At the hundredth meridian. Where the great plains begin.”

Fast forward the tolling of bells and I have now accepted the country and the country of me; I am a resident, then a citizen. I am living in British Columbia. I have a car. And I’m driving the corduroy roads of inner BC and there’s weeds standing shoulder high. I have now stood on the top of hills and surveyed the lands both east and west devoid of human civilization but the tread of caribou, moose, and bear, all overseen by the eyes of eagles in keening flights through the whistling wind. I ponder the endlessness of the stars in the woods as meteor storms pass and agree to move to Edmonton. 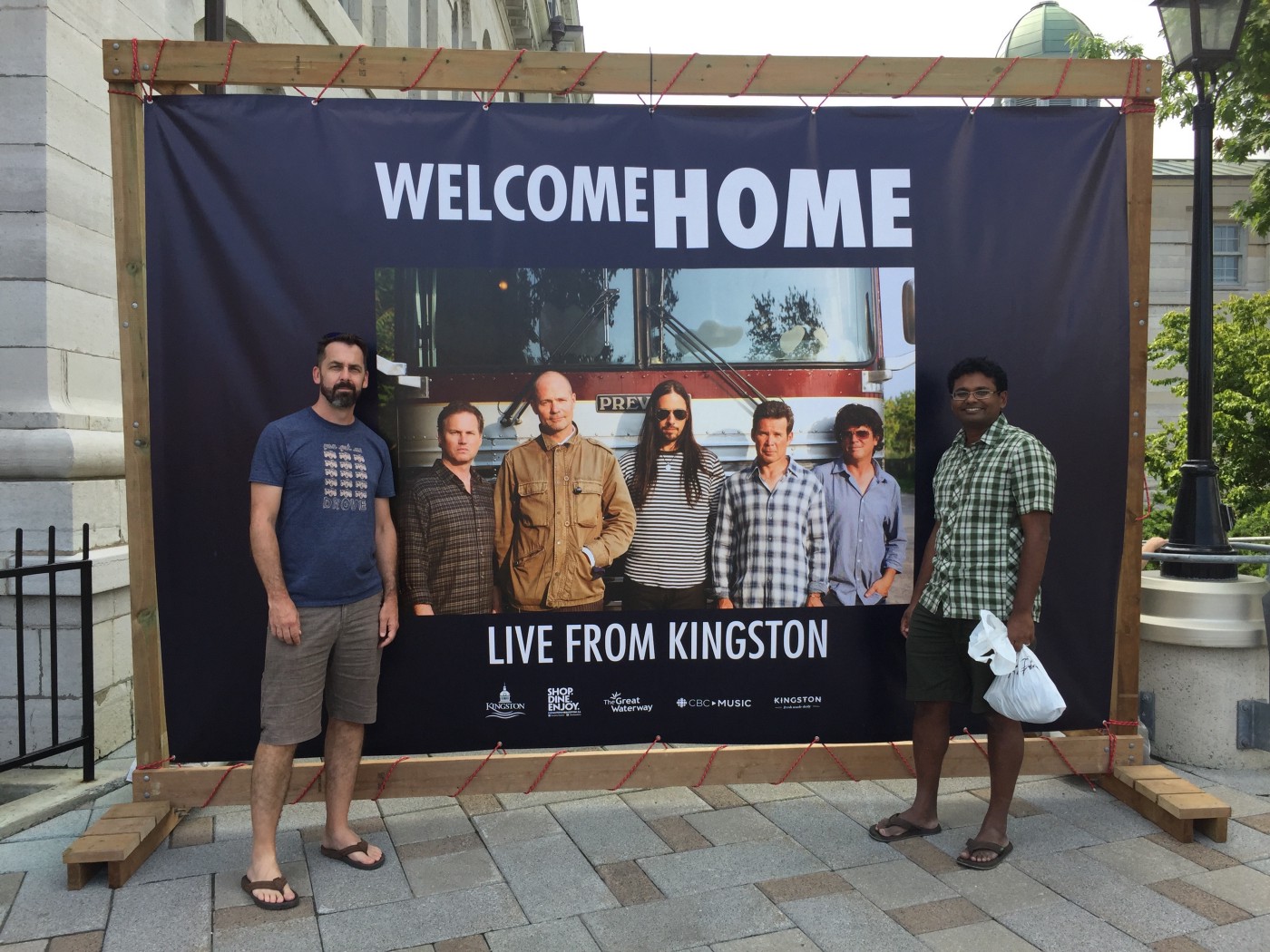 Edmonton is where I fully completely understood the power of The Hip. A rhythm that now moves me and moves right through me. Through the Hip I now have an understanding of what it means to be Canadian.

On my Canada Day trips to discover the country I drive the highways to Yukon, past waterfalls in Northwest Territories, walk on the shoulders of glaciers in the Rockies. I drive through forgotten towns, fences and ranches. I listen to the CBC on long car drives pondering what it means to be Canadian. I go to an Oilers game and witness the passion, the excitement, the fervour.

One day, a friend and I go looking for the Hundredth Meridian. I am truly indoctrinated in what it is to be Canadian. Despite all our many problems I have fallen in love and lived in ocean, mountain and prairie.

From oceans, mountains and prairies I now move to the industrial heartland of Canada: Quebec and Ontario. At the same time the Tragically Hip seemed to fade out of view. They were a band that meant the world to Canada and yet I had stopped, to my shame, listening to them as much. Perhaps at the heart of that transformation was my own transformation, now fully accepted and running around Canada creating new works and businesses. I was becoming even more aware as each year went by, now with a Harper government, of the frailties of our democratic system. 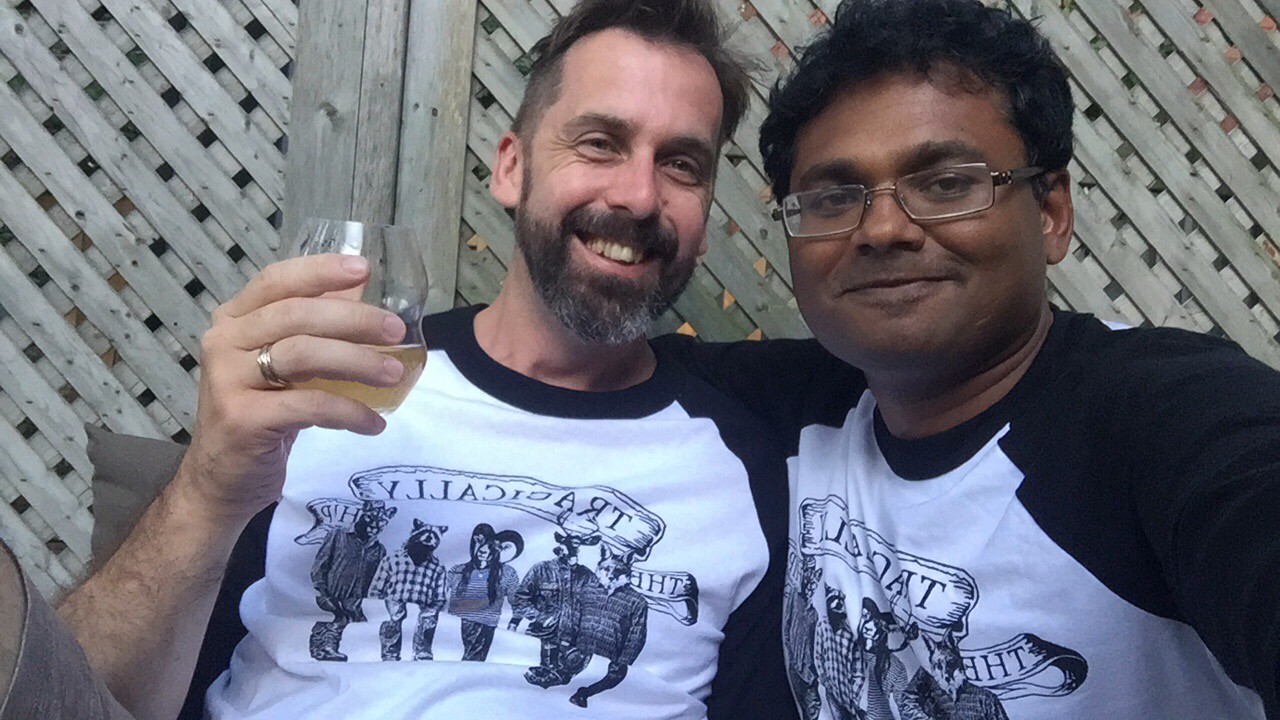 Even still, The Hip continued to democratically produce new music.

They, like their audience, were growing older. Life ever more fragile. Gone were we as youngsters floating through visions of Canadian history. Now they were rock poets and prophets. During this time, The Hip were firmly out of my mind. I’d hear the random song on the radio. Whenever we would drive the 401 from Montreal to Toronto, we’d play their old stuff and exclaim to ourselves as we passed by the Hip’s hometown, Kingston. A place we knew but hardly visited.

Then wonders behold, I moved to Kingston, Ontario. A place I never thought I would ever live. This was the home of the Hip. The K-Rock Centre was the arena built for The Hip to have a place to play when they were home. Driving Bath Road to Picton you pass Millhaven maximum security prison and the Bathouse Studios. All the local musicians know The Hip. Everyone has a story like when Rob Baker was playing guitar in his yard waving at passers by. They were just “the boys.” 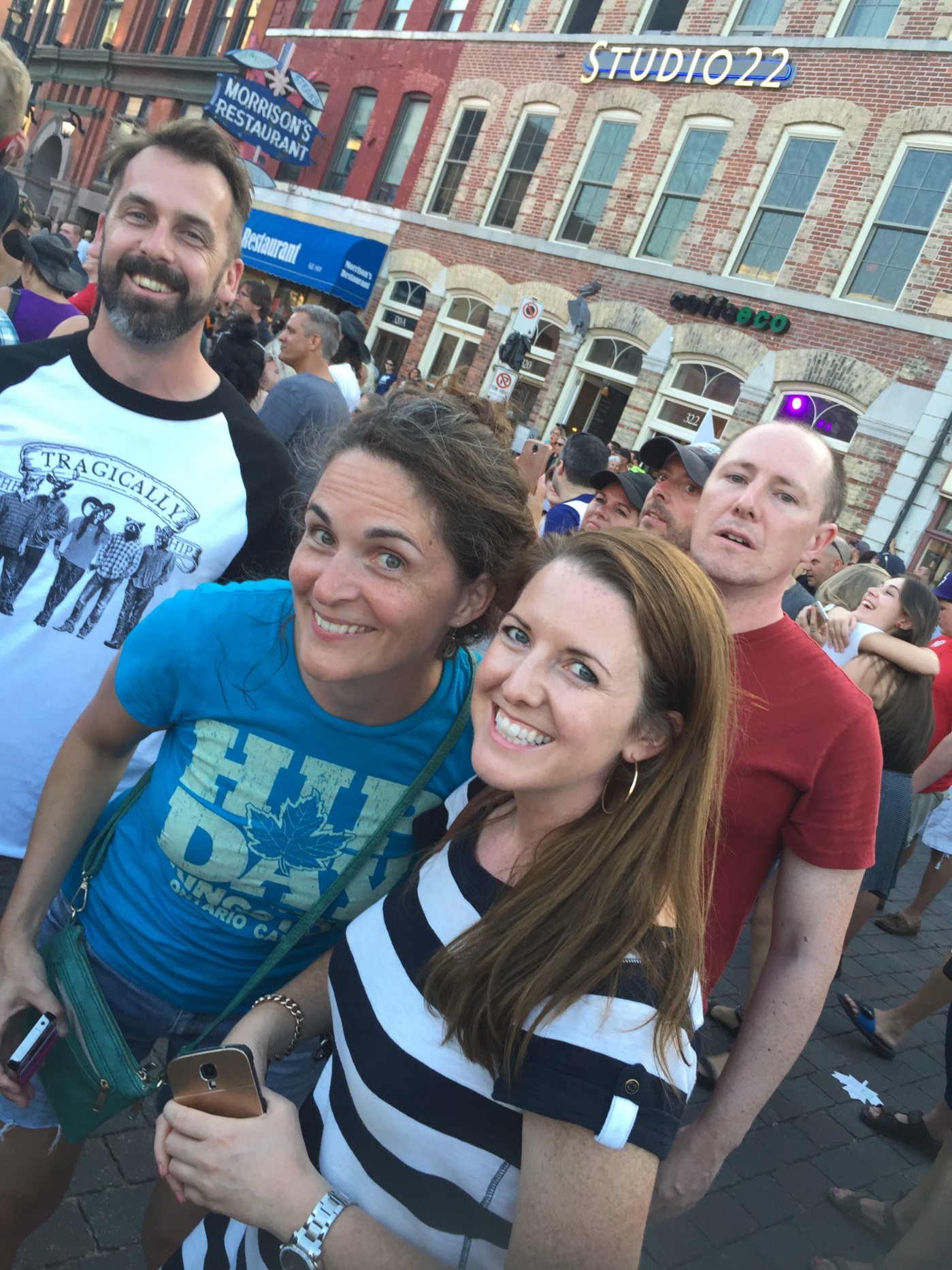 I learned to adapt to small-town life. The lake lapping often rhythmically on the shores where I worked. Even as I created a life for myself, we wanted so much more for Kingston. We wanted to leave the idea that it was simply a stop off the 401, a stop to hide from when weather got bad and you had to escape a road that was bigger than us or larger than we bargained.

“I thought of maybe quittin’
Thought of leavin’ it behind”

And a group of us persevered. In the Hip’s hometown we created an international event, we even invited Paul Langlois and his other local band (The Campfire Liars Club) to perform. There were so many times when I saw him that I wanted to be the fan boy and tell him that as I discovered Canada and Canada discovered me, the Tragically Hip was there by my side.

By this point, Gord Downie was diagnosed with cancer. We knew the end was coming, but could we accept it?

Part 5. “And quietly undressed in a world completely possessed by the human mind”

August 20, 2016. The day was gorgeous. We had planned a party, like everyone, everywhere in Canada. We would drink on a deck overlooking Lake Ontario with a barbeque, the Hip’s music playing, beer flowing. The clouds distantly signalled a storm, maybe later that evening, maybe the next day. But today would be sunny and warm. We would line up for t-shirts, we would sign the big card for the Hip. Friends from Toronto and Montreal arm in arm amongst the throngs. This was the final concert. 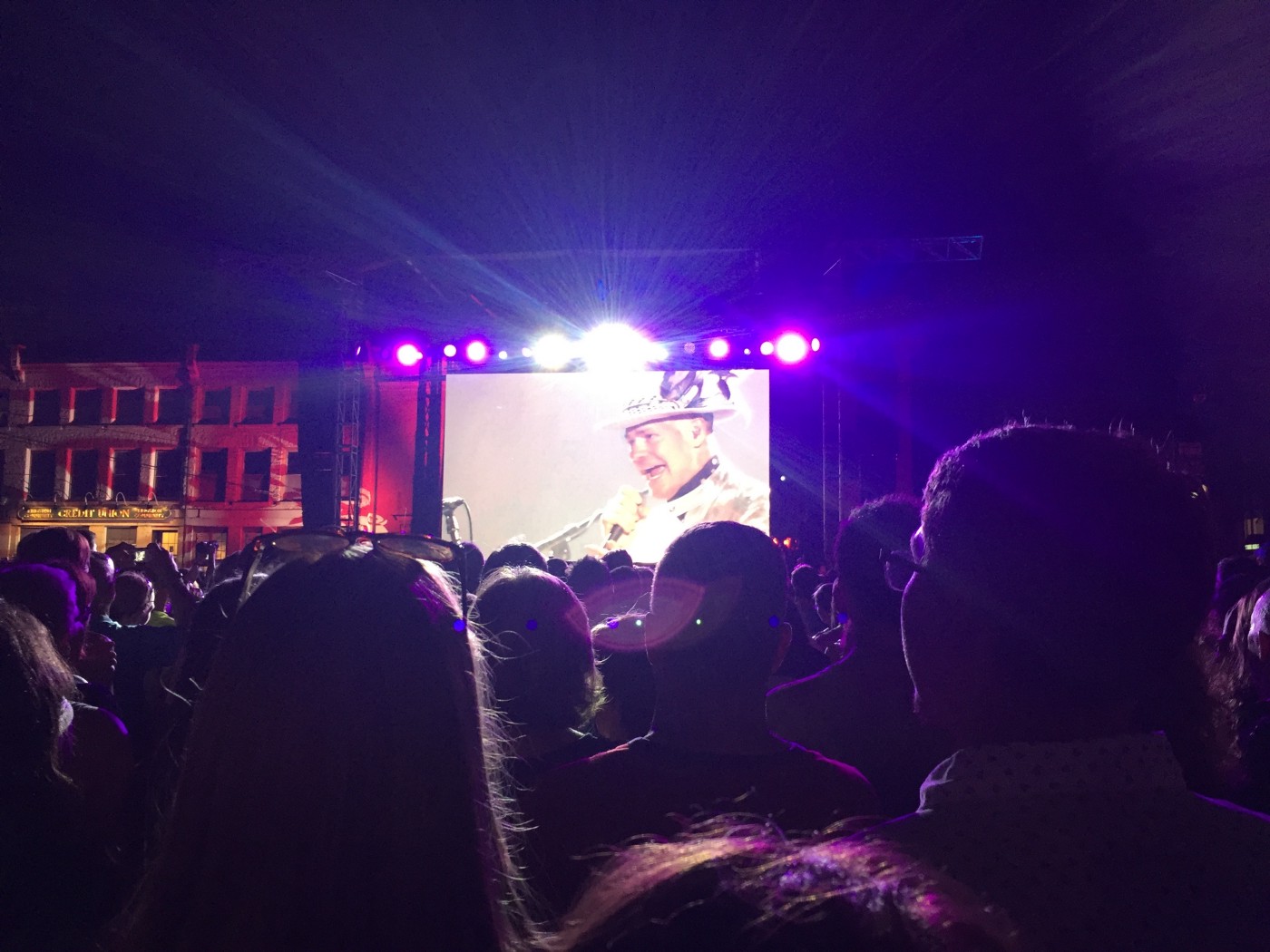 And then it was over. None of us wanted it to be over.

We sat watching a near full moon rise over Lake Ontario.

We listened to the Hip and we talked about what that meant. We were brought together, we cried, we laughed and we celebrated. We talked about life over the last 25 years, all the friendships that we had created, all the places we had been. And I remembered how I had once hated this band and refused to accept Canada as my home. We have come so far together, Canada, The Hip, my friends and I.

And then it was over. So very much over. I didn’t want Kingston to be over. But it was.

This weekend, listening to the Hip with Eddie, talking about what they meant to us and those of every walk of life in Canada, I now reflect on what that music means to me here in my new home, so far away from my old home. All things and all chapters must close. There’s new music to be discovered and new people to bring great music to. The Hip are relevant to those outside Canada, I just need to first learn their songs and their music so I can explain who we are through our music.

I am not homesick, I have your love, I take it into my heart.