A sparkling 25 year celebration of SIS

In 1992, an eventful and historical year similar to every other year, a group of Hong Kong teenagers bid farewell to each other and scattered to the four winds. 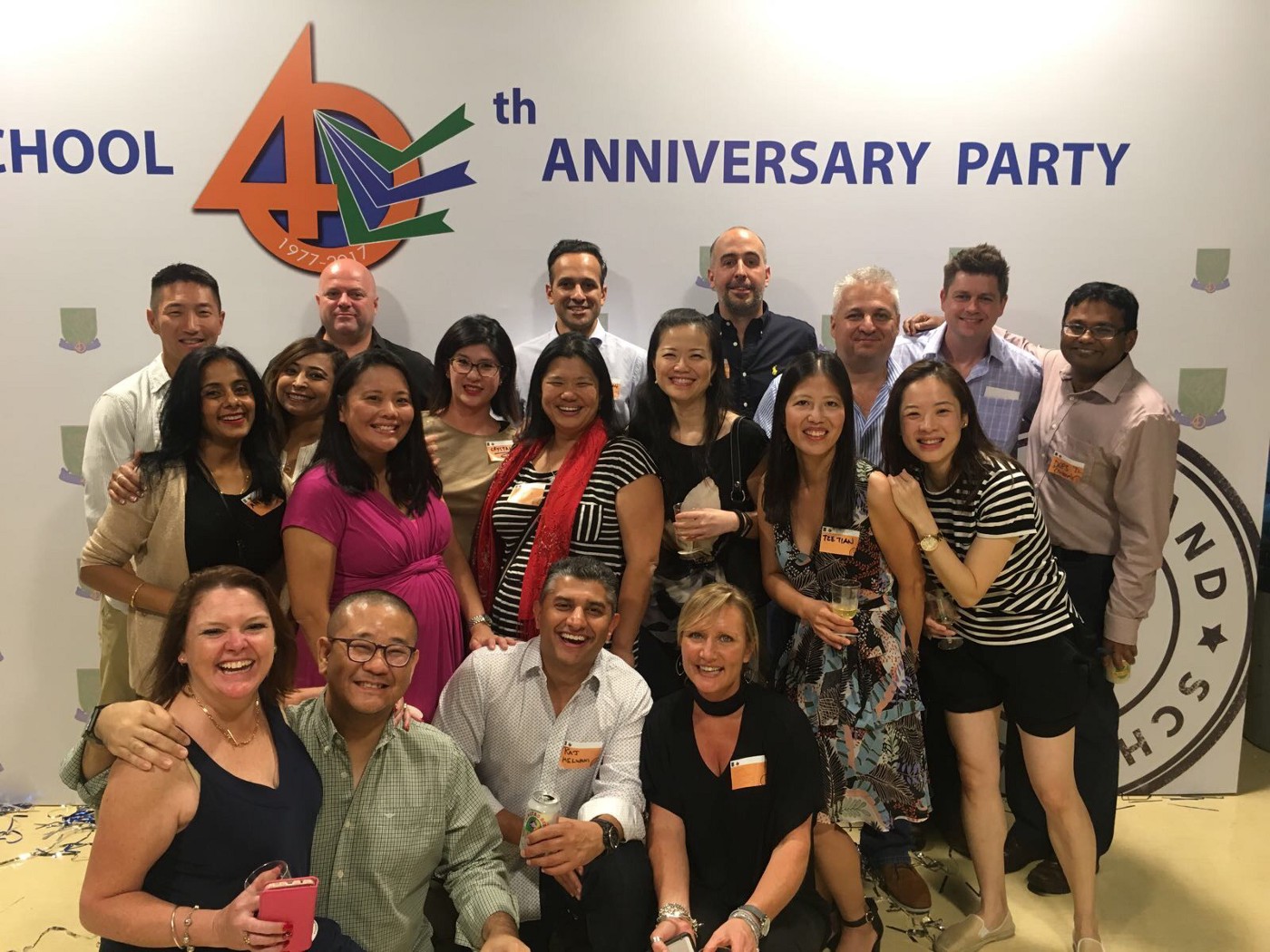 In 1992, an eventful and historical year similar to every other year this world has seen, a group of Hong Kong teenagers bid farewell to each other and scattered to the four winds. To the eyes of any stranger, this group of teenagers was probably no more different, no more remarkable and no more special than any other similar set facing the end of secondary (high) school and embarking on their lives’ journeys.

I hardly ever write about my high-school experience, which is a shame, as it was, unlike each of the above sentences, remarkable.

Putting myself into this context: I was neither the most popular kid, nor the coolest, nor the brightest, nor the most creative. I was not the most rebellious, the most well-loved, the most athletic or the most extroverted. I was not captain of the basketball team, nor the captain of the debating team. On occasion I tilted at curtains with a ruler like Don Quixote, badly lip-synched to Michael Jackson and had all the fashion sense my mum could bare to muster on any given day. In this seemingly very average existence you would think my experiences were not something to look back upon so fondly and yet I do, and perhaps, as I discovered this week, so do a lot of other people. 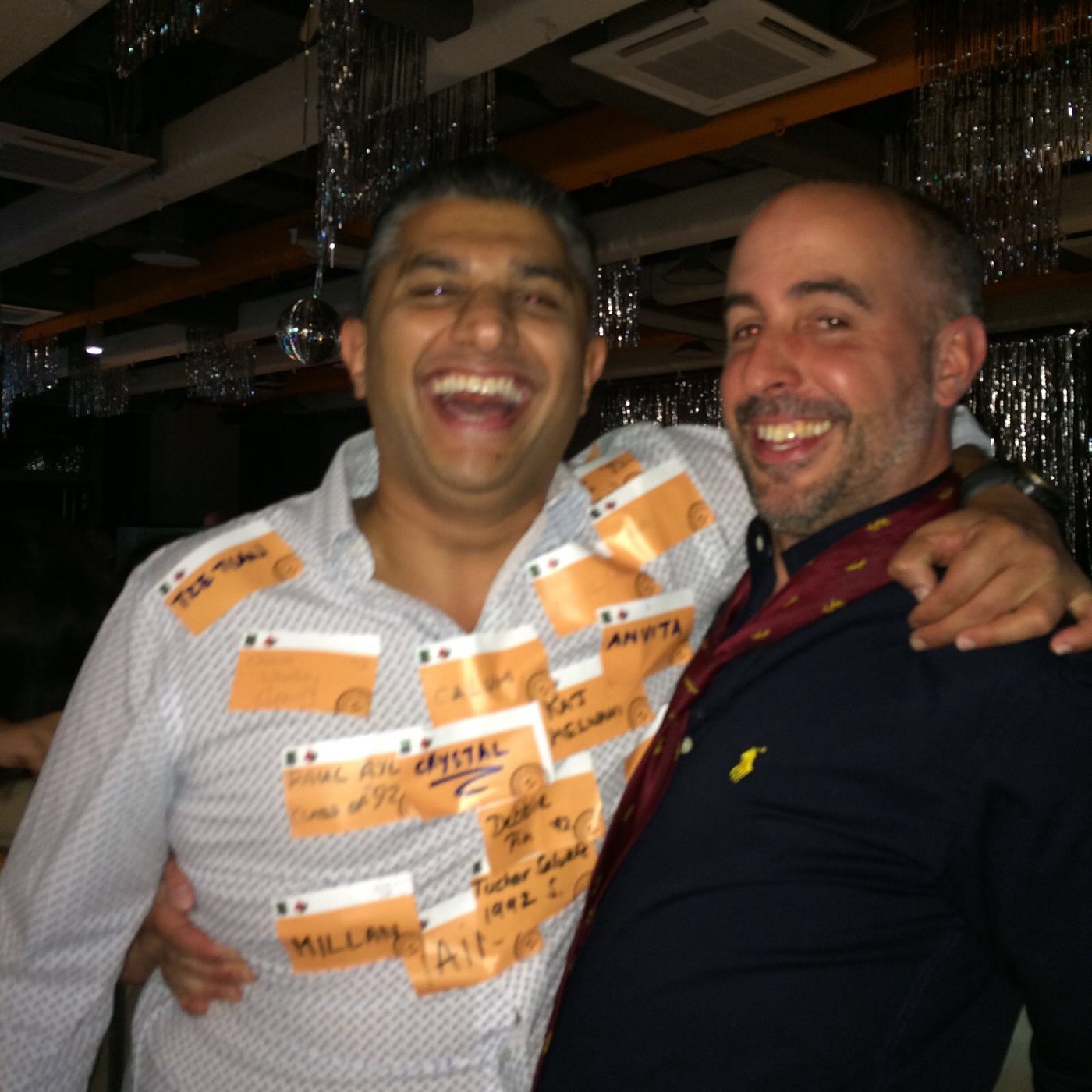 Raj and Paul : I know it’s blurred, but this pretty much sums up how I looked the entire weekend :)

My high-school was South Island School. It is perched on Nam Fung Road looking out upon Repulse Bay, Hong Kong, backed by a steep hill (where we were forced to run cross country); and when I went to the school from 1985–1992, we had about a thousand students divided into 5 houses — Aylward, Jefferson, Hillary, Tolstoy and, of course the best, Schweitzer. Most of us had parents working for the Hong Kong Government or private companies, hailing from dozens of countries and cultures including Hong Kong itself. This week, the school celebrated 40 years and a lot of us celebrated 25 years since the last time we set foot in that school (and in my case Hong Kong) together.

Moving to North America I discovered that most people recalled their high school experiences with dread. Considering how Buffy the Vampire Slayer is in large part a send-up of the horror of going to high school, this was a reaction that I neither understood nor shared. It’s not to say that school was perfect, or that we treated each other with absolute respect, or that we didn’t have flawed and very human teachers. We were, after all, a bunch of hormonal teenagers. We tormented each other and I daresay that some were bullied over the years and there are many things I am sure each of us would like to take back, change or otherwise shake our heads at and put down to, well, we were stupid teenagers. On that count let’s hope we’ve all done better since and into the future. 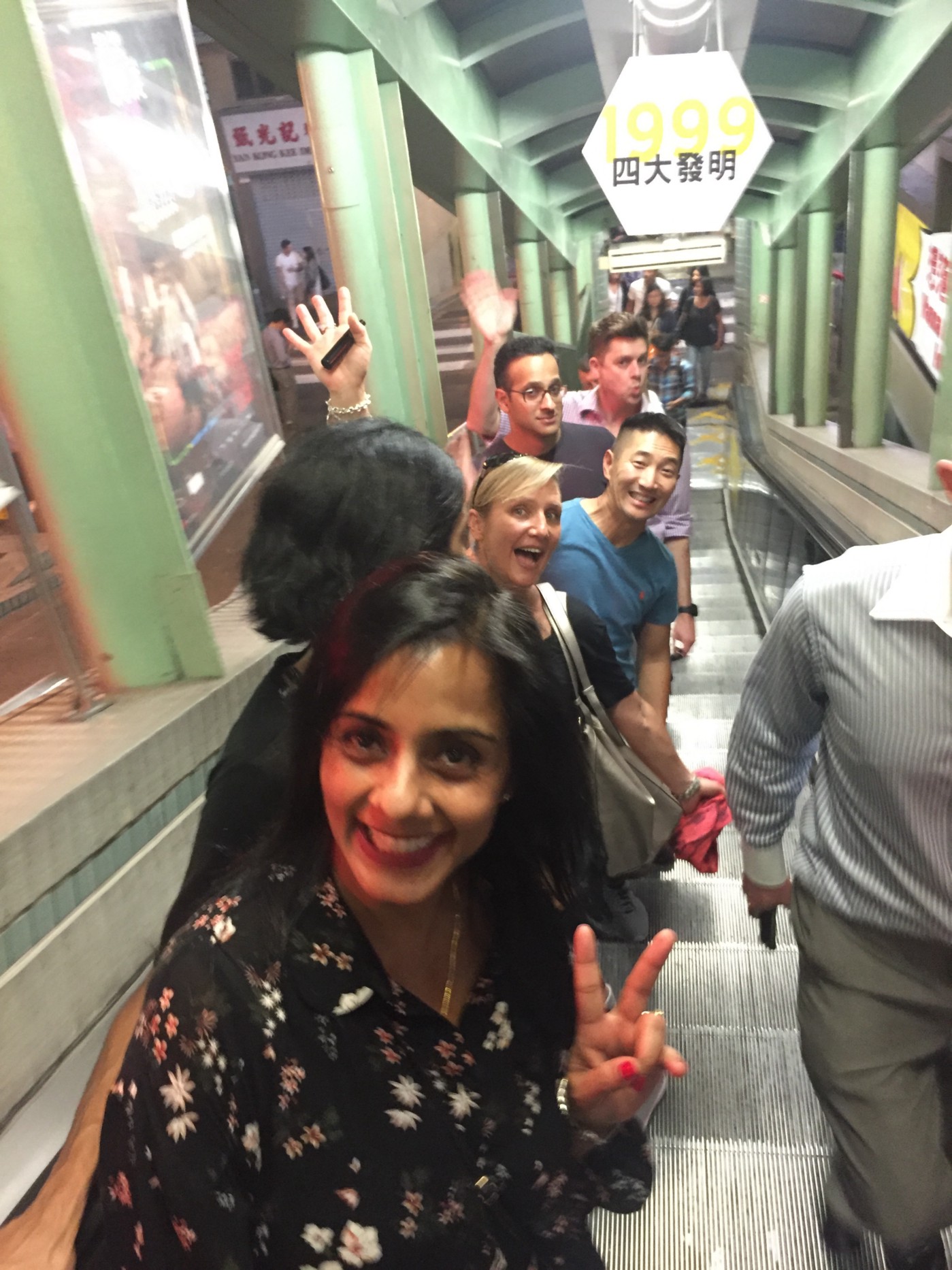 However, in Hong Kong at that time in history we were able to experience something unique. Imagine a moment in time when an Asian Tiger truly was at the top of its game; growth and expansion in Hong Kong was unparalleled. Meanwhile, 1997 and the hand-over of Hong Kong to China loomed in everyone’s, certainly our parents’, minds. At that time it was a large unknown, and we as children had no say in its outcomes. All we knew was that many of us would not be able to come back to the home we grew up in, and in most cases that also applied to the parents. For those children facing the barrel of Brexit in a couple years, this might have some similarities today. We were also all “Third Culture Kids”.

In all honesty, South Island School is responsible for most of what occurred later in my life. Had Neil Whalley and Nick De Graaf never introduced me to Dungeons and Dragons (much to my mum’s horror) I would never have worked at BioWare. Had Mrs. Moffatt never agreed to allowing myself, Sung, Tanuj, Tushar and others to create “The Dragon” newspaper, I’d never have ended up at The Muse and found that other group of friends that have changed my life. And heck, if Tushar hadn’t called me a “Dupsi Doodles Dumpling” in Form 2 due to my continuing battle with clumsiness, you wouldn’t be reading this on “Dups.ca”.

But what truly changed my life were the people and the personalities that I spent 7 years and 10+ hours a day in class with (and then likely many more hours on conference calls in the evening). It was the shared experience of trying to beat A-Levels and GCSE’s together, competing and learning, loving (crushing on) and fighting with each other. And this week, it all came flooding back. Here we were, so many of us, from all over the world, back together, walking around the school, socializing and learning about our last 25 years.

And that was just it: it didn’t feel like 25 years. Yes we’d all aged, yes many of us were now parents, yes some of us could no longer run the cross country course even if forced at gun point, but we were fundamentally the same people just older, more confident, wiser (relatively speaking), and frankly, imho all-around better. Old rhythms forged through that shared history allowed us to push away the awkwardness of both time and space. We weren’t a bunch of strangers. What I saw in each person was the pride that each had for who we had individually become but also pride in our schoolmates. We had had 25 years of failures and successes, being beaten down and having gotten back up. For many of us who had had strict parents, this was the first time for us all to socialize with a drink or two, or heck, go dancing in Lan Kwai Fong. We were, I felt, the group with the largest laughs and the most hugs. And it wasn’t reminiscing about our “great shared past”, because frankly, the details escape us due to our advancing years and much of it was the history of teenagers. We were laughing and merely just “being”, for the first time in 25 years without much to care about than each other, just as we used to in the refectory between periods. 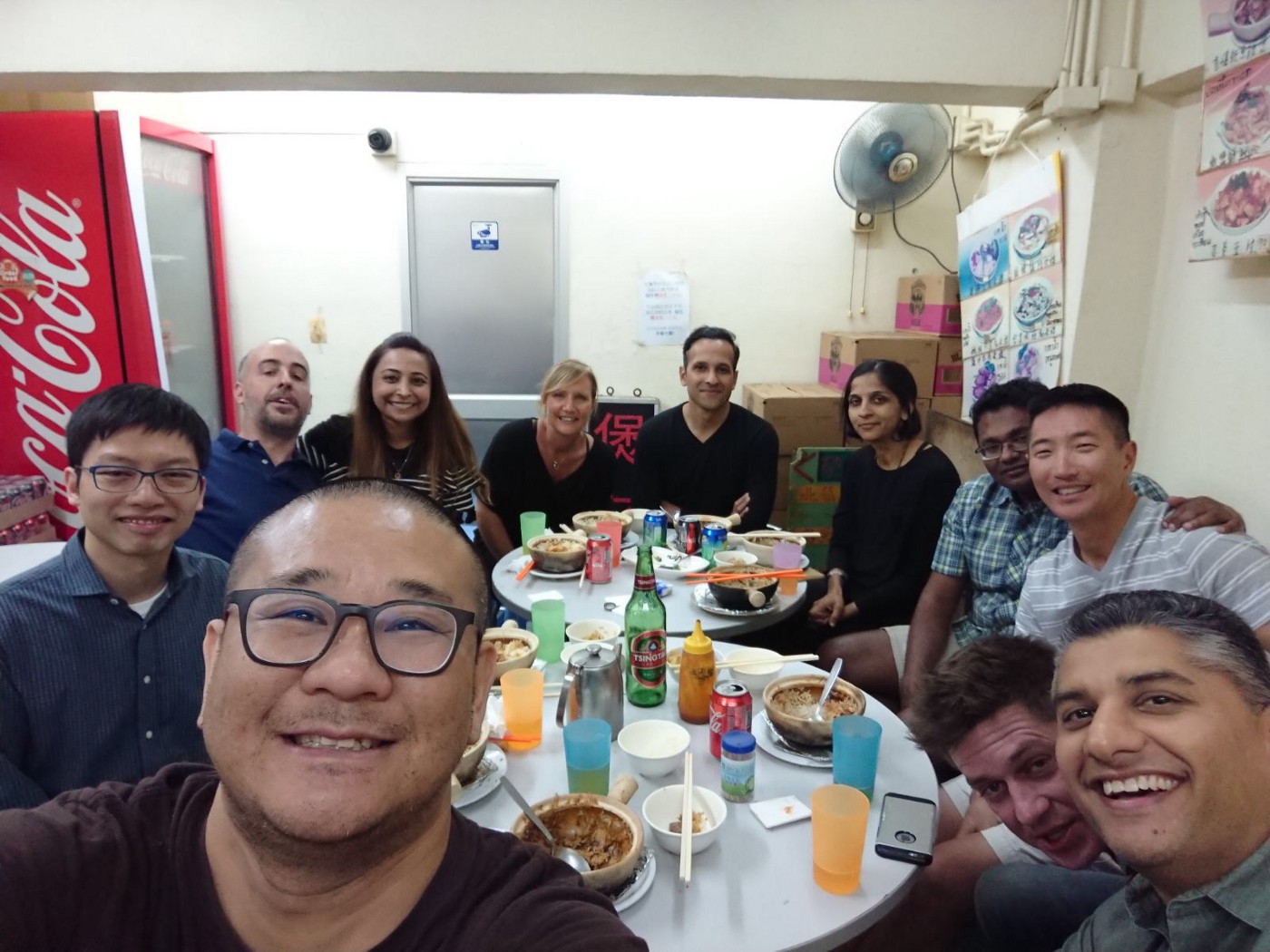 And we missed so many people. Reunions half-way around the world suck because life and circumstances mean we couldn’t have all of us there. Through the magic of Facebook I hope others did share and did realize what was happening and know that they were missed. I can say with almost 100% certainty that your name came up at least once if not more, whether you left in 4th form or 7th form. Sadly, there were three people who were taken from us far too soon — Geethi Weerakoon, Simone Painter, and Maria Thompson. The longevity of our collective memory stands inversely proportional to the shortness of their lives.

I personally realize that for me, this trip back to Hong Kong reflected a personal partial coming-to-terms with who I am. They say, to get to know oneself, one must revisit one’s past, but never to idolize or regret, rather to realize the lessons reflected and refracted in and through our present selves. If that is the case, I learned that my South Island School family is much larger, more diverse, more beautiful and more incredible than the slivers of my fading memory, and that I am incredibly fortunate to have you all in my life.

So this is my love letter to the class of ’92. Thank you South Island for bringing us together then and now, whether you made it here this week or not.

Let’s not wait another 25 years. 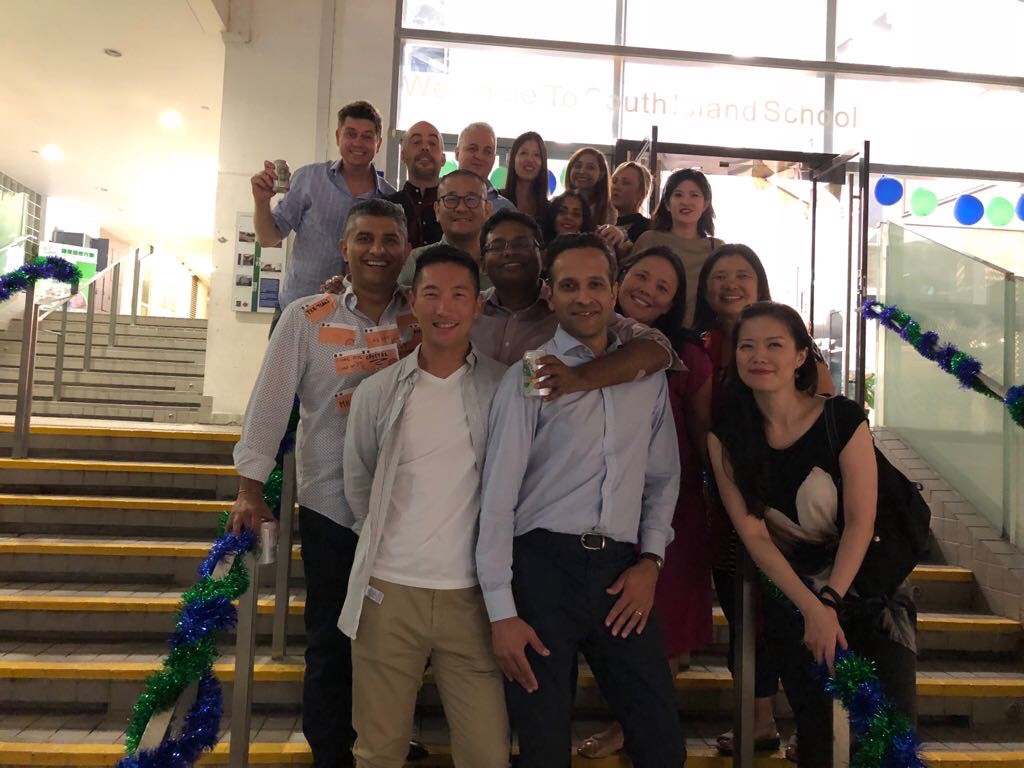