Erwin: “Colonialist amnesia” : The myth of the two founding nations

Dr. Erwin Warkentin: an unvarnished consideration of the Canadian experience

The best compliment I can give Dr. Erwin Warkentin, as well as my other university mentors, is that he has constantly made me question pretty much everything. As he was teaching me Goethe and Schiller, he was also teaching me about the prairies and the German heritage of Canada. This is an unvarnished consideration of the Canadian experience.

I was born at the Misericordia Hospital in Winnipeg, Manitoba in June 1959 as a dual Canadian/German citizen. It rained that day. My mother’s family came to Canada in the 1870s with the initial Mennonite migration to Canada and were settled in “reserves” in Manitoba — yes, we too were put on reserves. I grew up in the inner-city which was and still is where the immigrants usually buy their first home. My first job was delivering newspapers for The Winnipeg Tribune and then The Winnipeg Free Press. I have an enduring love of newspapers in the broadsheet format.

I’ve worked as a furniture-maker, car salesman, and waterbed salesman (road shows through northern Manitoba and Northwest Ontario) among other things. I went to university at the age of 26. Being married with two children made it tough. I finished a double honours BA at the U of Winnipeg (German and Philosophy) in three years. Between 1989 and 1994 I completed both my MA and PhD at the University of Alberta. From there on I’ve been a professor of German and also of Communications. As part of my academic life I played mid-wife to a university in Manitoba (CMU) and intensive care nurse to another in Paraguay (Universidad Evangelica del Paraguay). Right now I teach German and Communications at Memorial University (and do research and write books about it) which allows me to do all these other things that I really care about (see above). 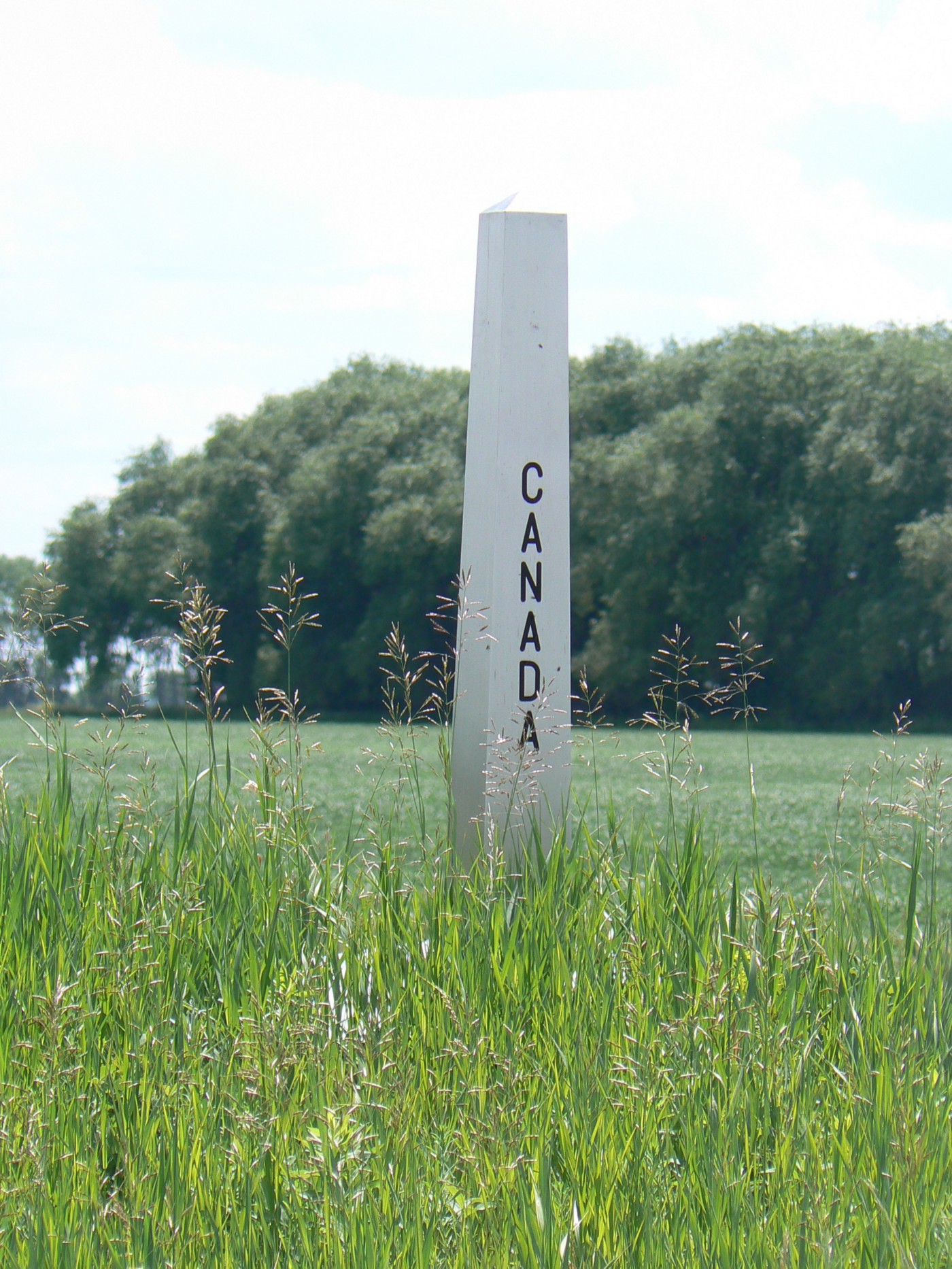 It’s the place I was born and thus I have no choice about being a Canadian. My father, for whom it was a conscious decision to become a Canadian, it meant a great deal more. I consider myself far more as a prairie person rather than as a Canadian. I grew up within sight of Canada/US border marked with its sentinels every quarter mile or so — pictured here is the boundary marker at the back of the baseball field in Blumenort [Place of Flowers], MB.

This always made me incredibly skeptical of things called borders and thus the concept of a nation. What made the dirt on the other side of that post fundamentally different from the dirt on this side of the post?

Nothing, other than the words of politicians in Ottawa and Washington D.C. telling me that I am somehow different than the people over there. (Please note, I am at this point putting on my helmet and flak-jacket). There is far more that separates me from my Prime Minister than from the North Dakota farmer I can meet at the border, shake his hand, commiserate about flooding in the spring and the lack of rain in the summer and -40 in the winters. In reality, the borders in North America run the wrong direction. As a Winnipegger I have far more in common with someone from Kansas City than with someone from Toronto, Montreal, or Vancouver. 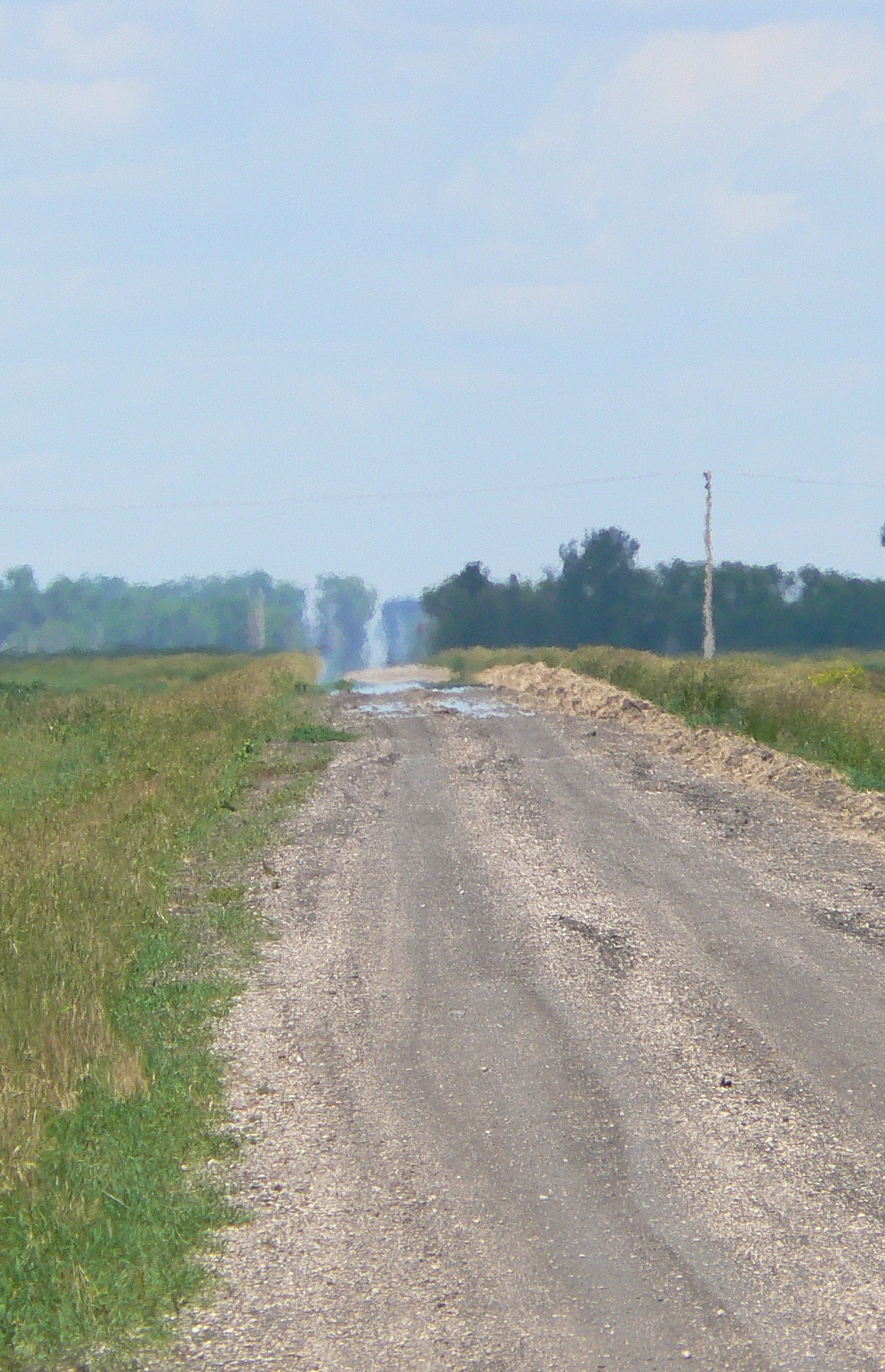 Photo: Note that the shimmering in the distance is the mirage-effect you get on a hot day in July in Southern Manitoba. Weidenfeld, MB. Photo by Erwin Warkentin.

Somewhere on the prairies on a clear day at +35 degrees with the heat rising from the soil. In this case, a village (Weidenfeld [Field of Willows] MB) that is only remembered by the cemetery where the generations of my mother’s family are buried — and indeed my mother, father, grand-parents, great-grand-parents, great-great-grandparents are buried there. This is where I feel at home and happy. It’s not a morbid fascination, but rather a place where I can concretely see my connection to the land. Oddly enough, a picture of the road that runs past the cemetery “in” Weidenfeld looks exactly like the place my family comes from in Germany. (Note as well that the towns and villages in this part of Southern Manitoba have German names).

Canadians have a certain arrogance about being Canadian. We seem to have forgotten how insignificant we and our activities really are to the rest of the world. That, incidentally, can also be a really good thing at times. I don’t care for (actually hate) the colonial attitudes still present in Canada which are enshrined in Canada’s laws and, more significantly, our mythologies. We have the myth of the two founding nations (French and English) with the occasional bone being thrown to the “First Nations.” In emphasizing the English/French founding of Canada the other contributors are completely ignored.

I was here at 100. Do you remember this? We were all made to sing it in 1967. I may or may not make it to 175. I would like for Canada to finally find peace with itself. I would like for Canadian politicians, whether federal or provincial, to stop the fear-mongering for the purposes of political gain. Left, Right, and Centre, they all do it. Stop playing the provinces against each other and stop inventing imagined slights between the provinces. You’re being ridiculous and childish. We would not allow equivalent behaviour in our children, so why is it okay when the adults in government do stuff like this?

Specifically, for all of those who are in Winnipeg in 2042 these words from Alden Diehl.